Lynx Broadband systems have been installed in hundreds of schools and universities around the country. More reliable and affordable than traditional coax distributions systems, these HDTV distribution systems deliver programming over twisted pairs, using less bandwidth intensive than streaming video/IPTV.

This school district selected Lynx as part of a district wide program to upgrade its visual learning capabilities. In addition to using Cat 6 instead of coax, the schools use state of the art projectors to display television programming, internet pages, and presentation materials sent from the teacher’s computer.

Lynx Broadband recently completed a turnkey installation in Washington State for a brand new, state of the art, college dormitory building. Service to 304 TV’s over Cat 6 was distributed across five floors in the new facility, providing service to common areas, dorm rooms and game rooms.

The University of Florida’s Health Sciences Center uses Lynx to deliver cable TV to 80 offices and classrooms. They like having a universal cabling infrastructure that lets them deliver data, voice, and television to any location. This lets them expand or modify their television network as their needs change.

This high school uses Lynx to distribute 16 in-house channels and 21 cable and satellite channels to 175 locations on Cat 6 cable. The picture quality is excellent, and it is easy to handle moves, adds, and changes.

Lynx Broadband HDTV, television and video cat 6 distribution networks are a great alternative to coaxial for delivering entertainment and patient education to patient rooms in hospitals and healthcare facilities.

Lynx Broadband systems deliver internet TV, patient education, other Internet services (such as e-mail and electronic games), telephone or in-house announcements – all on the same cable that delivers the television channels.

Blessing Hospital had an old coaxial distribution system that was long overdue for an update. Patients constantly complained about poor picture quality and the maintenance department was always busy handling service calls. Rather than rip out their old coax then replace it with new coax, they decided to upgrade and “future proof” by installing Lynx. The new system delivers cable TV, satellite TV, and in-house programming to 336 TVs.

This hospital delivers satellite TV, movies, e-mail, and patient education services provided by Get Well Networks to 184 TVs. They selected Lynx because the hospital wanted to go “all digital” and Lynx was more cost effective than streaming video or IPTV.

Lynx has been installed in many military, federal, state and local applications. Having access to a universal cabling infrastructure makes it very flexible for handling moves, adds, and changes.

Built in 1905, the Minnesota State Capitol in Saint Paul had reached a critical deterioration point. Over the past three years, the Capitol was renovated at a cost of $309.674 million dollars.

Lynx is used in many trading floor, law firm, PR firm, and other corporate applications. It provides ultimate flexibility for moving TV locations as people move. Consequently adding new TV locations is much faster and less expensive than pulling coax.

Advantage Futures recently upgraded its infrastructure and doubled its office space when it moved this spring from the Chicago Board of Trade to new facilities in the heart of the city’s financial district.

Venable’s Government and Regulatory Affairs group recently relocated their offices and redesigned their infrastructure to provide state of the art telecom, datacom, and media delivery services. They selected the Lynx Television and Data Network to deliver television and data on a shared Cat 6 cable. Lawyers use the television to monitor activity in Congress. They report “perfect” picture quality with the Lynx system.

Lynx Broadband systems are installed in many hotel application in the United States and Europe. It is more cost effective and reliable than coaxial cable systems. Older hotels that need to upgrade their outdated and inadequate coax cable to handle HDTV are installing Lynx Broadband systems and using their twisted pair cable rather than taking on the expensive, time consuming and disruptive task of pulling new coax cable behind existing walls.

This hotel did not install coax cable because they intended to use a streaming video/IPTV system. But after the facility was built they discovered that the IPTV system was not ready. Consequently they chose Lynx to deliver DIRECTV to 203 guest rooms, and got installed in time for their opening.

What applications are best for Cat 5e and Cat 6 HDTV and video distribution? 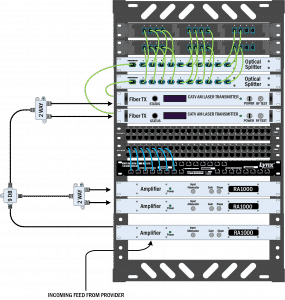